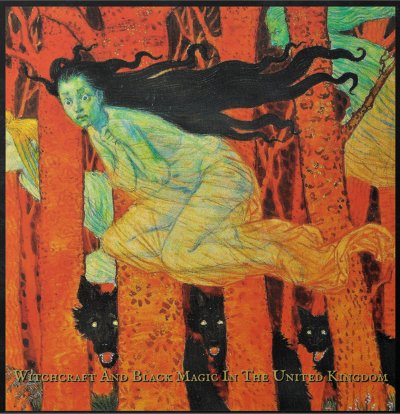 The idea of paganism has not only been around for centuries upon centuries, but it has permeated our very society as we know it. The legends and horror stories of witches, people sacrificing animals, worshipping heathen gods, selling your soul to the devil; all and more are subjects that we’re familiar with in some form, and the most famous of those are of the witches and black magic. Many artists have brought such a concept to life on multiple times, and it’s Eighth Tower Records that takes the focus of dark ambient to the land of the United Kingdom to bring back witches in such a fashion that is nigh on delectable.

All the tales that surround them are numerous enough to fill several compendiums more than they already do, and it’s the exact sort of thing that fits perfectly for some creepy as fuck music. Even the cover art itself shows us what exactly Eighth Tower Records has crafted for us here: a unique experience of color that’s brilliantly cloaked in dark atmospheres and an absolutely astounding menagerie of artists who bring witchcraft and black magic to the world of dark ambient, and it couldn’t be any more captivating. All the artists involved here whether they have just a single track or multiple like those of Daniel Williams have made amazing contributions to the entire body of work that is “Witchcraft and Black Magic in the United Kingdom” as its a true set of the talent that dark ambient has to offer on the British Isles. Everything within this compilation gets right underneath your skin, knows how to make your blood freeze in an instant, and then it continues to work its way into your very soul such that by the time the track ends you’re left bewildering by the amazing sights you were shown only for the next act to grab you in very much the same fashion. Dark ambient can easily be seen as something that doesn’t take much talent or even coordination to do, but, clearly, those people don’t know how to difficult it is to create an atmosphere that can adhere itself so well to single concept but it’s every single artist on display here that makes it into art that cannot be denied, and it’s the kind of shit that’s befitting that of a grandiose horror film that knows precisely how to get under your skin.

Such are the works that are on display here that they could very well fit into the film “The Witch” and feel right at home on so many levels, and every artist here brings something new to the table that keeps the concept fresh and immensely intriguing. Any single person who can appreciate good atmosphere and doesn’t mind taking a step into the world of darkness and unknown magic where anything can happen, then Eighth Tower Records has yet again handcrafted a listen that’s perfect for you.

LISTEN to “Witchcraft & Black Magic in the United Kingdom” on Bandcamp here.