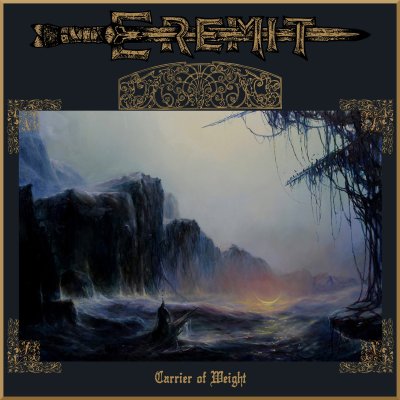 It was a little over a year ago at this point that we got one of the heaviest, most ambitious, and an extremely meaningful albums of doom metal in recent times: Bell Witch’s “Mirror Reaper”. Ever since then, it’s been a small goal of mine to continue to find more and more bands that manage to bring that same level of massive presence, conviction to the craft, and otherworldly talent that makes the material in question shine brighter than everything else coming out at the time. And let me tell you, that’s a long search and one that will lead to many bands that come close but never quite fit the bill. Yet, somewhere in the first half of 2018, I started hearing whispers and murmurs of a fresh act out of Germany. One that had no material out, but one whose members were skilled and ones who truly poured all into their creations. It’s not often I follow my gut as far as this, but it’s with Eremit that I’ve found the band that’s too heavy for mere words to comprehend, too all-encompassing to fathom with one listen, and too chilling to not experience firsthand. It’s extremely rare we get something like this, but it’s with “Carrier of Weight” that we find the true epitome of soul and imagination at its most intoxicating as well as its heaviest.

Imagine, if you will, you’re on a wooden ship. There’s no sound but the creaking of the olden boards and the splashing of the waves. There’s naught before your eyes but the mast and the deep, thick fog amidst the vessel. Then a sheer rock cliff appears to your right and a warm glow begins to resonate somewhere in the distance that you can barely make out. Just by instinct, you drift towards that warmth. That right there is the perfect backdrop and setting for “Carrier of Weight”. The isolation of being on that ship paired with the sudden terror of being encroached by those cliffs and the slow meandering towards that light as if you’re a moth in the black of night fluttering towards a lantern. In just three tracks that span over an hour in total length, Eremit manages to produce a fierce tale as well as diligently paint a picture very much like that of the cover art. But that’s only the very beginning of what we get with “Carrier of Weight”. I’ve always likened many extreme metal albums to pieces that you have to prepare yourself for in order to really digest everything that you’re about to hear as well as state that the record in question is far from something for the uninitiated, but it’s with Eremit and “Carrier of Weight” that it’s taken to a new height.

Truly, this is something you have to mentally prepare yourself for, and if you would wanna go into “Carrier of Weight” and put it as background noise thinking you’ll get the gist of it I can’t advise against that enough. This grueling experience of an album is something that you have to sit all the way through at least once, and if you’re brave enough to want to go back and enjoy every single little morsel that Eremit throws our way then it’s going to take several (and I mean several) spins of “Carrier of Weight” to achieve that. And should you wonder if Eremit would miss anything key and crucial to a great album of the sludgy doom world then worry not for quite literally every base has been covered here. In each track, we get three distinct flavors that are all encompassed by this amazingly thick style that’s as much an unorthodox gorgeous approach as it is heavier than the core of a star.

The entirety of “Carrier of Weight” is an absolute roller-coaster in that regard with “Dry Land” being the most pristine opening with an isolating atmosphere to it all with a grand yet subtle sense of terror, “Froth Is Beckoning” brings us something of the fucking thickest and heaviest riffage that I’ve ever heard, and then it’s with “Cocoon of Soul” that we’re gifted an over 30-minute opus of a closer that could pass as an album all its own but Eremit is brave and ambitious enough to make it their grand finale for their debut album. I’d also want to sit here and tell you how great the lyrics are but I simply don’t have access to them right now, but that doesn’t take out the massive impact of the vocals as even though not one contribution to “Carrier of Weight” lacks any sort of grandeur, excellence, or mastery it’s with the vocals that you feel particularly enchanted with half the time. But the same can be said with the rest of the instruments which makes Eremit feel and sound like one of the most well-rounded, equal, and most exquisite displays of ultimate sludgy doom that we’ve gotten in years. There’s nothing here that Eremit didn’t pull of masterfully on every scale with “Carrier of Weight”, and if this isn’t one of the most talked about doom records, and come its release in a few months then it should be viewed as a crime against fucking awesome music!

It was earlier this year that I scoped out Eremit as an act that I would watch like a damned hawk for it was an act that I felt good about. And then, fortunately, everything continued to fall into place as if this band was made just for someone like me. The band signed to a phenomenal label. The cover art was made by the illustrious Mariusz Lewandowski (Bell Witch). The news of the album having three tracks and stretching to be an over hour long marathon. Then how the band consisted of a member from Dragged, one of my favorite and most underrated doom/sludge metal bands I’ve ever heard! Truly, the name of Eremit is one that I already revered long before hearing a single note, but it’s with the fucking mastery and out of this world quality that I go into 2019 screaming the praises of “Carrier of Weight” in all of its glory! Everything about this record is something that is to be heard, known, and loved from that first eerie note to that final declaration as “Cocoon of Soul” comes to an end. It’s very rare that I can claim albums will make it to the end of that year as one of my favorites, and I’m fucking calling it with Eremit! Mark my words, “Carrier of Weight” is an album I will refuse to be silent about for the entirety of next year, and I will be damn disappointed if this record becomes lost in the muck for others like so many other records. But even then, Eremit is a shining jewel that will be coveted by those lucky enough to hear them and “Carrier of Weight” will be an experience that fans of the genre will want to go through no matter what!

LISTEN to an advanced track from “Carrier of Weight” on Bandcamp here.