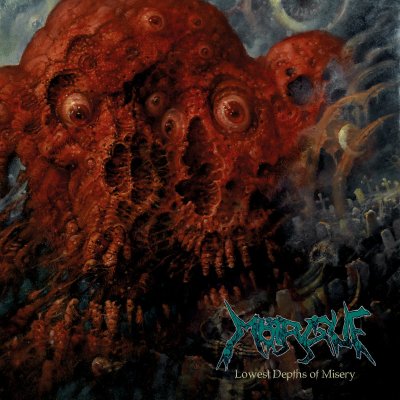 It is never too late to rectify mistakes or improve upon previous works for any given reason one may have. Many bands either don’t take the opportunity to revisit past material in order to reshape it into a form that they can be more pleased with or they simply aren’t given the opportunity for whatever reason it is, and it’s in every way that Morgue refused to move forward before they rectified a vision that they feel didn’t come to true fruition. Over five years in the making, the re-recording of “Door of No Return” proved to be a patient vision with “Lowest Depths of Misery” the end result of purifying that very vision with patience and talent. In no small way, this particular resurrection has done nothing but immense justice.

Right from the very cover art of this album, it’s clear that Morgue took this revisitation extremely seriously. A painting from the likes of Paolo Girardi is always a step in the right direction for any band who knows what they’re doing with Morgue absolutely being one that fits such a bill, and it’s every given moment of “Lowest Depths of Misery” that one should need to prove that this vision is well and truly fully realized. While more a death metal approach than one might expect from this band that has always laid on the very floor of the underground with a goregrind sound that is absolutely uncompromising in its rawest form, there’s no way to deny that this is a new form of Morgue that feels fresh but ever so visceral without so much as a moment’s hesitation. There isn’t one second wasted for the very whole of “Lowest Depths of Misery” as Morgue work their deadly magic throughout these nine wholly unforgiving tracks that offer much more than undirected rage upon the world. Rather, Morgue is always viciously direct in its blistering, murderous craft as nothing is left to chance nor any survivors left behind as Morgue’s bloody work is taken to the absolute extreme to not only make “Lowest Depths of Misery” not just another record with a decent amount of power with the flying viscera to match, it becomes a recreation that Morgue should be immensely proud of for all that it dares to bring to the table and succeeds without falter.

An album that’s able to come back around like this is something that demands to be heard, and I know damn well that those who love to lose themselves in the deepest reaches of the underground will find nothing but the sickest kind of pleasure within the dripping, flesh-wreathed catacombs of “Lowest Depths of Misery” and all that it has to offer. With all that was delivered in this record and the very tenacity of Morgue not being something to be denied since day one, one can only wonder what’s to come next from this visceral and immensely focused act.

LISTEN to an advanced track from “Lowest Depths of Misery” on Bandcamp here, or via YouTube below.