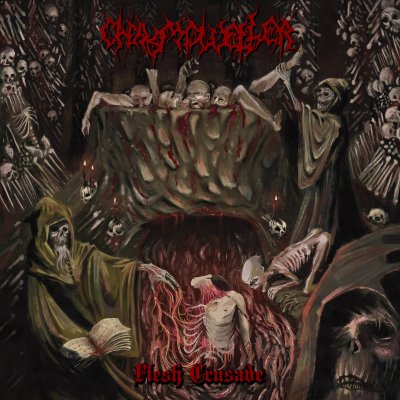 There are plenty of constants that I find myself crawling back to over time when doing these reviews, and I don’t think I could ask for anything better. To have a list of names that I can always return to and hear more, excellent material virtually without fail is a joy like extremely few others for me. When I first came upon Chasmdweller a little over two years ago, I never once thought they’d become an integral part of that list. After several works across these past two years, it’s somehow with their latest that we have gotten their certifiable best which is staggering considering their growth since the very beginning.

While their beginnings as a death/doom act were undeniably powerful for all of the patient excellence that they were, I cannot deny the transition that Chasmdweller has made into full-on death metal as anything other than staggering for all that it brings to the table. They already had an unbelievable understanding of immense heaviness, not to mention some of the members’ currently two parts of Malgöth, and to witness them crank up their speed to a scathing level such that it does no less than peel the very flesh off the bones of all caught in their path is to not only see Chasmdweller really explore their sonic desires with “Flesh Crusade”, but it’s to see one of the underground’s best-kept secrets really come into their own. The all-consuming whole of these five tracks showcase to us what this voracious act is capable of even after pumping out material a lot more often than what many would agree as a “healthy” stream since it can be very easy to lose quality after a lot of releases over a show amount of time, but it’s in enthusiastic defiance that Chasmdweller defies such expectations with the very existence of “Flesh Crusade” showing us that they are far from done from raining pure devastation upon us, and I don’t think any of us are going to complain about that. And this is all without even mentioning the staggering 21-minute finale that caps of “Flesh Crusade” as what could single-handedly be the greatest piece that Chasmdweller has created to date by far, making this record all the more fantastic to experience over and over again.

A band that’s able to deliver increasingly engaging albums every single year with a confusing lack of dip in quality is something that any of us would covet should we come across one, and anyone who doesn’t know the name of Chasmdweller better get to work going through their backlog of releases for they’ve never been a band to miss for any proper excavator of the underground with the future looking extremely bright for this act. Every possible facet of “Flesh Crusade” is magnificent to behold in all that it offers with the final result absolutely being something that Chasmdweller should be immensely proud of.