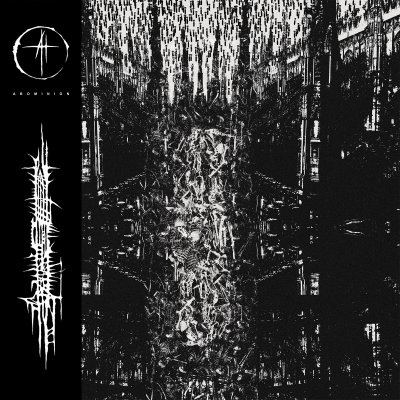 The endless void of extreme metal is something that can be just as rewarding as it can be downright malicious as we go from one band to the next, and it really depends on the band in question as to what kind of balance you get between the two. Some bands like Howls of Ebb keep the heaviness in relation to crazy instrumentation that’s rewarding to the curious, but others are like Cryptae who do nothing but revel in sucking the very light out of its victims. In every way, Abstracter is an act that is very much of the latter with their reputation slowly rising with their harrowing craft since their start, but it’s on their newest excursion into the deepest regions of the abyss that we may have gotten their most enduring work to date.

We could sit here all day and argue what sections of metal Abstracter falls under whether it’s blackened death, doom-infused doom, crusty black-death with doom atmospheres, or literally anything else the mind can conjure, but it’s after such pointless deliberation that only one word can we agree upon that perfectly encapsulates what this band has always brought to the table: extreme. Such a term isn’t nearly as fitting for many other bands as what Abstracter has always delivered throughout their outright monstrous discography, but it’s almost with absolute certainty that’s with “Abominion” that they’ve tapped into an entirely different level of chaos. This is the soundtrack to the very apocalypse, and even such a bold claim as that does little to do justice for what all Abstracter brings to the table for this equally power and soul-draining performance that is all but striking in all that it accomplishes as well as the devastation that it causes with a seeming flick of the wrist – a true demonstration of the power that this band has infused their sound with over the years. To bathe in the very essence that Abstracter brings to the table for this release is to experience one of the most vicious acts prowling the endless darkness of the underground with more than enough power to back up their gangrenous bite, but it’s even then that we get only an inkling of what this name is truly capable of with the whole of “Abominion” being a blinding display that has the power to very well disintegrate those who are not ready for such raw power and fury with explosive musicianship the propel everything touched by this sound into the deepest regions fo the abyss.

“Abominion” itself is a title that’s the bastard pairing of abomination and dominion, and I truly don’t think any word, real or fake, could be used more effectively to provide a verbal description for such a work. This is the music of absolute, all-consuming darkness the likes of which several acts across all of metal strive to achieve in some form or another with very few being able to bring forth even half as well as what we have gotten here, yet it’s even then that I’m not surprised that the colonels of the darkest brands of devastation known as Abstracter are able to pack such a massive performance into just five tracks. Let no mistake be had, though! To step into the horrific halls of what “Abominion” has in store is to throw your soul into the very throes of a thriving darkness, and Abstracter will make sure that your stay is one that you won’t soon forget.

LISTEN to an advanced track from “Abominion” on Bandcamp here.