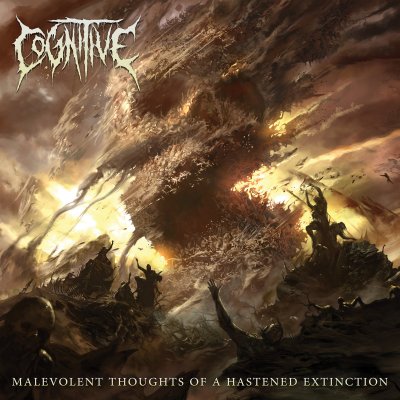 If we were to take the time to talk about any worthwhile band that has come out of the absolute tsunami of new technical death metal bands in recent years, we’d be here for days. To just pluck one out of the ocean of others is sometimes the best way to dig through as much as you can in order to experience as much as you can despite how slow of a process that might be. For over six years, though, there has been a band that’s been slowly moving their way up through the scene to just recently put out their fourth full-length that’s by far their best yet. Right from the very beginning, Cognitive has been more than worthy of attention.

Where the boom of tech-death really started to take on speed and become the powerhouse of madness that it is today I won’t even dare to try and pinpoint, but I’m more than confident in saying that Cognitive was one of those acts that were fumbling their way around the sound with the goal to make their own form of brutality before many modern greats became well-known or even existed at all. It’s in every way that Cognitive has been using the now ten year’s of their run to their advantage as they have not only honed their sound and talent to be a viciously deadly curved sword that is beyond sharp to the touch, and I would dare even say this is one of the more raw instances of technical death metal that I’ve had the pleasure of submerging myself in. There isn’t a single moment spread throughout these ten blistering and unyielding tracks that aren’t made the absolutely eviscerate all in its path without discrimination or exception with the very title and cover art for “Malevent Thoughts of a Hastened Extinction” being far more than big words but, rather, a vision of utter devastation that Cognitive is more than capable of carrying out. No stone is left unturned in this bewildering work of defilement the likes of which are becoming more and more common, but nonetheless staggering to listen to by all accounts.

It’s with the cover art that impressions are always instantly made with Cognitive being no strangers to that, but to those of us that are familiar with the name know that this is a band that has taken utilization of the deadliest weapon of all to their utmost advantage: time. It’s only with time that Cognitive has become all the more potent in their vicious craft, and “Malevolent Thoughts of a Hastened Existence” is the vortex of pure chaos that is not to be denied when it comes to their raw, unrelenting power.

LISTEN to “Malevolent Thoughts of a Hastened Extinction” on Bandcamp here.