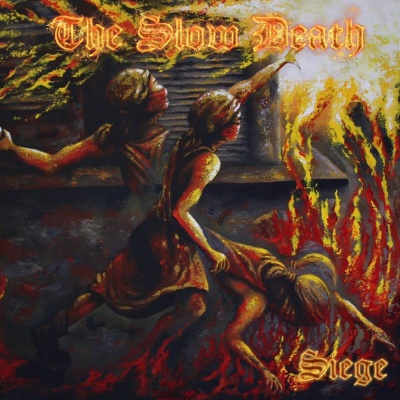 When we talk about the elite names out of what has become the modern state of death/doom metal, there are some names that just naturally come to us. Mournful Congregation, Clouds, My Dying Bride, Paradise Lost; the list goes on! As with every sound, though, there’s always a subsequent list that encompasses rising names that are well on their path to becoming household names that are currently putting out material that can’t be considered anything other than titanic. The Slow Death has been a name for years now that demands to be heard, and it’s with their latest that the Australian act could very well launch themselves into the spotlight they rightfully deserve.

If the name of The Slow Death is sadly unfamiliar to you, then perhaps the name of Illimitable Dolor is. That band has only been around since the tragic passing of the vocalist from The Slow Death, but the two albums that band put out were no less than exemplary yet it’s even then that Illimitable Dolor was born out of the talent that made up The Slow Death. In every form, this band is its own entity that doesn’t have to have any connection to its counterpart in order to be enjoyed, and it’s any of the four lengthy tracks that make up their new record of “Siege” that can prove that. It’s right from the start with that evocative cover art that The Slow Death immediately sets the tone for what they’ve crafted for their newest full-length record with how melancholic it is while still being so damned powerful to the core that it makes one shudder at the very prospect. It’s every virtually every form that “Siege” delivers to the listener a performance that cannot be denied whether it be in terms of theme, delivery, or style as The Slow Death shows that they have become true masters of their craft in a way that becomes all but the most enthralling of works all the way into the fiery end.

There are incredibly few works like this that are as striking in practically every category as what we see here in this thrilling performance with the effectiveness that can leave an impact for years into the future, and I couldn’t think of a more fitting band to achieve that than The Slow Death who is clearly growing at an exponential rate. The very life force of “Siege” is not to be trifled with, for it’s with supreme power and immense talent that The Slow Death made the entirety of this work something that demands to be heard and with such glory that it is all but destined to be hailed as one of the year’s best.

LISTEN to an advanced track from “Siege” on Bandcamp here, or via YouTube below.