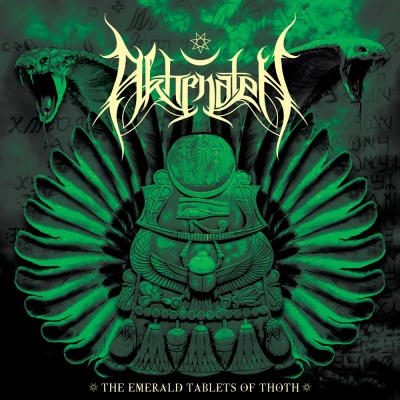 Of all the combinations of different styles throughout metal that I’m always looking for more of, the marriage of death and folk is one that does not happen nearly enough. There are some bands that are able to do it justice, sure, but to come across an act that takes full advantage of what such a sound could possibly be would be to create something that truly cannot be found elsewhere in music. One of the few names that come to my mind of those that are able to execute it well, Akhenaten definitely comes to mind. Their last album was downright massive in every form, and it’s with this forthcoming album that they kept that momentum going brilliantly!

There’s nothing quite like an ancient Egyptian theme done well, and that was just one of the many strengths that Akhenaten’s previous outing, “Golden Serpent God”, had going for it that instantly made it stand out from many of the other releases from that year, and it’s with “The Emerald Tablets of Thoth” that Akhenaten is poised to repeat itself. But what we have here is very much the next step in everything that Akhenaten has been crafting up to this point with every aspect across the board coming together on a higher plane to make this effort a true spectacle to behold! If it was with the previous effort that Akhenaten truly came into their own with their blend of death and folk metal to makes every Egyptian subject they broach somehow even more epic and badass, it is single-handedly with “The Emerald Tablets of Thoth” that these guys show us that they aren’t just some fad that comes around to do just one good effort but, rather, a name that is not destined to fade away anytime soon with the potential to influence future artists very high. The imagination and craftsmanship that permeates every song throughout this album is absolutely staggering right from the beginning as Akhenaten doesn’t waste a single minute or a single note throughout the whole album to deliver us an experience that’s not just an awesome metal performance to fall into, but a cohesive work that presents to us the real glory that such a blend of styles can achieve if it’s put in the hands of the very capable. If Akhenaten is nothing else, they’re capable of bringing forth a wholly badass performance virtually without fault and it’s with “The Emerald Tablets of Thoth” that we get ten overwhelming examples of just that.

Whenever I go to use a prime example of what happens when you masterfully bring together the worlds of death and folk metal to make for a truly beefy work, I now have two works from Akhenaten to present to people, and it’s potentially on this effort that we’ve got a far superior creation. Right until the very end, the undeniable whole of “The Emerald Tablets of Thoth” is poised to become one of the best albums of its kind that we’re to get this year, and I will defend that claim to the fucking grave.

“The Emerald Tablets of Thoth” releases on April 30th via Satanath Records!

LISTEN to an advanced track from “The Emerald Tablets of Thoth” on Bandcamp here.