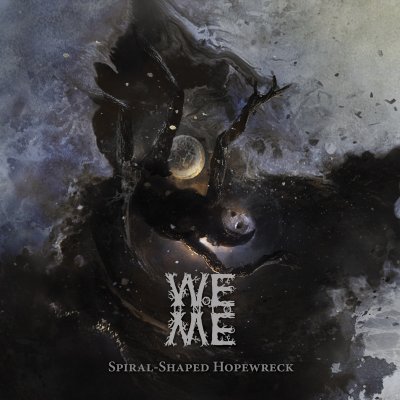 It can often feel like the world of death/doom for all of its potential excellence and glory to be had within its deeply emotional themes can sound oddly monotone in the wrong hands. It takes true craftsmen to really weave the style to their advantage in order to create an immensely evocative work that does not hold back in any category as the work unfolds in absolute glory before our eyes and ears. If they didn’t prove it before, it’s with their latest EP that Woe Unto Me proves themselves to qualify as such masters.

One of the things that will always stand out to me in the world of death/doom is the simple use of clean vocals because if they’re done well they can be utterly striking even in an amazingly basic form as it can be paired beautifully with growls and the unrelenting heaviness that the style has been known for both musically and emotionally, and it was absolutely one of the biggest strengths of what “Sprial-Shaped Hopewreck” had to offer. Even after several spins, the performance that Woe Unto Me has managed to churn out here is magnificent right from the beginning, and I would happily get into an argument with anyone who would dare challenge that statement for it’s only one rare occasion that such a concoction is pulled off as well as it is has been here throughout the entirety of the EP. And while the biggest detriment to “Sprial-Shaped Hopewreck” is that there are two covers out of the three tracks that make up the bulk of the runtime, they in no way take away from the glory that’s on constant display for the whole of the work but it is the title track that easily props this effort up entirely on its own without a single sign of strain. It’s an epic all on its own with Woe Unto Me constantly showing us what they’re made of as they almost immediately set themselves apart from the rest of the competition when it comes to the sheer excellence of the music as it hits all the right notes well beyond what many others dare to accomplish.

All of that and more results in “Sprial-Shaped Hopewreck” becoming a work worthy of great boast that Woe Unto Me can proudly tout to listeners of all kinds for it’s a work worth diving into time after time that death/doom fans will do well to investigate with true haste. Hopefully, we’ll see more material from this Belarusian act sooner rather than later and I can virtually guarantee that when it comes around it will be a work to behold like very few others that have come before it.