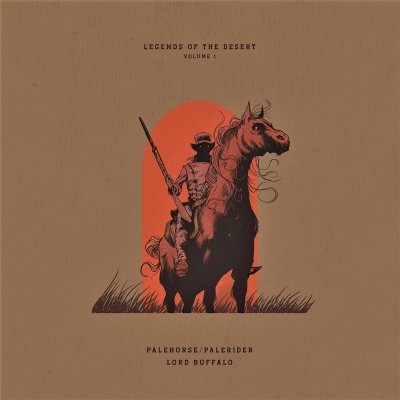 There are few things that get me stroking my beard in immense interest as a solid and worthwhile split between two awesome bands. Lord Buffalo has been a constant in my listening habits for years now, and Palehorse/Palerider has been a name I’ve been meaning to investigate for some time now. It’s only fitting that the growing genius behind Desert Records would seek to unite these talented acts for a split that can give us everything that we never knew we needed from the respective styles, and that’s just the very beginning of what “Legends of the Desert” does on its first issue. What ensues is nothing short of an absolute tour de force of upcoming talent the likes of which we’ll be hard-pressed to find anywhere else.

What catches me off guard about this release is that this split never once feels like a way for the bands to get rid of material that they’ve had on the back burner that they feel questionable about, maybe seeking to either never let them see the light of day or tweak them over the course of however long. Instead, it is here that these bands give us material that could very well stand on their own with immense pride and undeniable quality as EPs that would be equally deserving of recognition and respect on the same level of what’s to be had here. Right away, that makes this volume have an even larger impact on the listener without a single moment being wasted with each band being able to show us just what exactly they’re capable of: Palehorse/Palerider with drifting space clouds rooted in the many layers of doom and Lord Buffalo with their unique mud folk that’s constantly expanding while keeping the listener sharp to all that is around.

It is Palehorse/Palerider that take the reigns of this effort first with ever so slightly more material when it comes to runtime across the four tracks they bring forth compared to Lord Buffalo’s five, but it’s an entirely different story when it comes to the actual musical content. They really take the idea of “Legends of the Desert” to a great extent as every song in their section feel like epics that are taking place either somewhere out under the Sonoran sun, falling before the towering Joshua trees, or adding a new stain of red before the looming buttes. Every track is epic whether it’s the over 10-minute glory that is “Badlands” or the unassuming intro that is a perfect lead-in to Palehorse/Palerider’s contributions that are gripping, atmospheric, and magnificent on every level. But, then, it’s Lord Buffalo that performs an entirely different layer of the desert theme with everything feeling like it could take place in the middle of a dwindling outlaw town smack in the middle of fuck-all nowhere in the Great Basin. This is music that was created under the endless sky of the setting sun from the soul of a desert marauder attempting to forget what he has done. Between the sound that Lord Buffalo has sharpened into something incredibly deadly over the years to make for what’s arguably their best piece of material yet with “Noetica IV” or the hauntingly captivatingly strings that know exactly how to enrapture the very soul. It all culiminates to make “Legends of the Desert” a must-know series right off the bat, and both bands have produced material that will surely follow their careers for years to come.

I would’ve figured that it was going to take at least another issue or two before we got something really interesting from this split series, but, clearly, I was wrong and I had a feeling I was going to eat my own words when I saw who was taking the stage first. This is just Acts I and II of the soundtrack to the New Wild West where things are very similar yet extremely different where perspectives have shifted dramatically and the flavors are so much more refined in every single department imaginable. Both Palehorse/Palerider and Lord Buffalo have achieved what can easily be described as not only one of the best splits of the year, but also some of the most staggering displays of talent that both style have seen in years with two rising and unforgettable acts truly coming into their own with “Legends of the Desert” being the perfect catalyst to accomplish such a marvel.

LISTEN to “Legends of the Desert: Volume 1” on Bandcamp here.