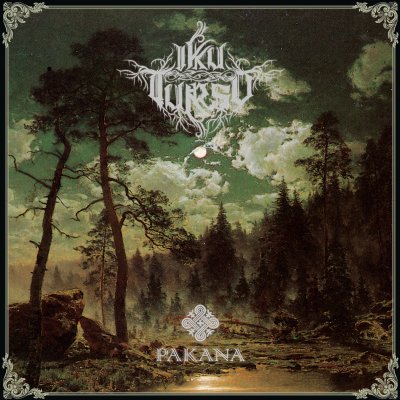 Ever since their bold entrance to the scene three years ago that feels so much longer ago, Iku-Turso has been gracious enough to give us a slow but satisfying drip of new material at least once every year since that flavorful debut. It’s been an act that I’ve loosely kept my eyes on over the years with the prospect of their sophomore full-length being what I’ve been wanting to hear more than anything else. Normally, I’d review something very quickly after I hear it. With “Pakana”, though, I knew I couldn’t do that because this was clearly something special just from the first track, and months later it’s clear to me that this is what Iku-Turso should call their magnum opus at this point.

Implementing folk elements along with a strong melodic presence is something that I prize highly in many black metal works that dare to attempt the very same thing, but there aren’t that many that can pull it off much less those that can execute it on a level the likes of which is constantly on display for the entirety of “Pakana”. Right from that very first note, you can tell that Iku-Turso is bringing something a little different to the table for this record. Telling the tale of vicious youth wandering through forests, grief, and unto that final cold journey, “Pakana” is a record that I’ll definitely keep as a benchmark for many albums of the kind that’s to follow in the future. It’s tough for me to say it but I believe it wholeheartedly: Iku-Turso has created what’s likely my favorite work of this kind, period. There are very few albums that I’ve heard from the black metal world in several years that have come even close to what “Pakana” has achieved in just a few tracks, and I can’t help but feel extremely confident in saying that this will be a record that I will be talking about come the end of the year and I’ll be greatly saddened if I’m the only one talking about it. Iku-Turso brings forth near-unparalleled musicianship that works beautiful with the instrumentation that is very much reminiscent of second-wave black metal tied with stunning folk implementation, melodies that are beyond gripping, storytelling that’s downright compelling, and replayability that is the very definition of intoxicating. Everything that was poured into “Pakana” cannot be regarded as anything other than staggering when the end result is taken into account, and I know for a fact that Iku-Turso is immensely proud of this creation as they rightfully should be with the quality of this marvel being no less than absolutely through the roof.

This album is the very definition of a massive record from the very concept instrumentation to the sheer quality that’s to be had in every inch of the work, and, if nothing else, it shows more so than ever what we’ve already know about Iku-Turso from past releases: they’re the real deal in every way, and they’re only to get better with each work. The very essence of “Pakana” is to be marveled at by throngs of black metal fans across the globe who are constantly yearning for a record like this, and I couldn’t think of a better band in today’s climate to deliver this next level release.

LISTEN to “Pakana” on Bandcamp here.