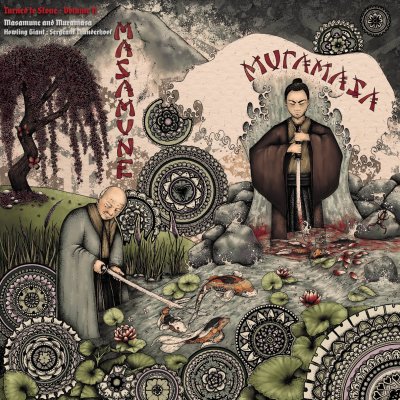 It’s not terribly often that we get a split album that’s less of a traditional split and more of a proper collaboration. Bell Witch’s latest effort in league with Aerial Ruin is the latest and most notable of such that comes to my mind, but before that, there isn’t more than a handful. I was very intrigued to see how both of these extremely promising acts could make something work together out of each providing 20-minute tracks detailing two fabled Japanese swordmasters. The result: nothing short of utterly stunning.

I could happily sit here and leave this review at calling it some of the best, if not the best, material that these bands have produced thus far but that would be to leave out so much of the sheer quality and untouchable talent that’s occurring in every single minute of these epics. With Howling Giant tackling “Masamune” and Sergeant Thunderhoof taking on “Muramasa”, there isn’t a single thing about this psych-metal experience that can’t be considered a true apex for the style this year. It is very possible that this is a split that can’t be defined as anything else but quintessential as both bands do nothing but deliver astonishing material that’s not to be missed if you’re any sort of fan of a style. Like a true collaboration, Howling Giant and Sergeant Thunderhoof really went out of their way to make “Masamune and Muramasa” feel like one cohesive work made by a single act as opposed to two, and I cannot stress enough just how well that translates through all 40 minutes of this endlessly satisfying work. We’re constantly on this brilliant trip through the lives of the title characters in a way that likely has never been done before, and there isn’t a way for me to describe just how much excellence is always at play. It enables “Masamune and Muramasa” not to just be a spectacular display of heavy rock in a way that we can never get enough of, but it shows of great storytelling coupled with music that’s beyond fitting for the topic and is even better at showing off the raw talent that both of this acts have always possessed in a light more flattering than ever before.

This is a beyond exceptional work that should definitely go down as one of the best works of the style for the year as a whole when taking into consideration all kinds of works whether they be splits, full-lengths, EPs, or whatever else there may be. “Masamune and Muramasa” may just be another eye-catching split to many casual listeners, but to those of us that have known these acts for years, we know damn well the gravity of this work. Both Howling Giant and Sergeant Thunderhoof truly dug deep in order to deliver the goods on this work, and I know for a fact that this is just a glimpse of their power that has yet to be truly tapped into.

LISTEN to “Masamune and Muramasa” on Bandcamp here.