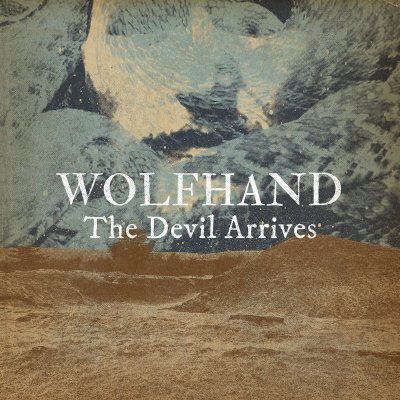 To sit here and describe any type of music as “cinematic” is always a small stretch for me because what’s the difference between something that feels “cinematic” or is just atmospheric or just some form of post-whatever? Well, nothing really. It’s just another flavorful world to throw in front of metal or rock to draw people in, and only on occasion does it actually fit even half well. Stepping into Wolfhand’s world filled with a delectable Wild West backdrop, I was pleasantly surprised to see this voiceless act succeed in the goal of achieving a cinematic listen.

An instrumental doomish act that falls into somewhere in the post-metal/rock realm is something that will almost definitely grab my attention because I’ve small hopes it’ll lead me to the next version of Clouds Taste Satanic. Evidently, that’s not what I discovered here and I’m okay with that because Wolfhand is by far its own creation that has more than enough quality to throw around for the entire runtime that “The Devil Arrives” covers in earnest. Each of these ten tracks have their own identity that they boast without shame whether it’s a humble opener that’s not much longer than a minute, tasty riffs with a glorious vision of desert mountains, or a somewhat droning expanse that makes you wonder just where Wolfhand is trying to lead the listener. We’re constantly being given a gorgeous mixture of doom that’s always skipping between its metal and rock variants yet always being covered in this post-coated atmosphere that really drives “The Devil Arrives” to become an immersive listen that really knows how to pull you in with minimal effort to the point where every track is something new to fall into, and not a single one of them disappoints when it comes to that raw entertainment factor. The whole album really does keep you listening as though you were listening to a gripping soundtrack of a movie that’s constantly building off itself to tell stories that are entirely up to the listener to interpret, and every single bit has something unique to call its own while Wolfhand does a spectacular job at keeping you more than invested to see what happens next.

There’s nothing quite like an incredibly immersive album of any kind from whatever style you may choose, and it’s clear here that Wolfhand has created something that is a real treat for anyone who’s seeking a good time before investigating this album for that’s exactly what you’ll find. “The Devil Arrives” comes together so organically with plenty of talent to throw around that it’s still amazing to bear witness to even after several spins, and it doubles as more than enough proof to the fact that Wolfhand more than knows what they’re doing with this incredibly promising and somewhat niche sound that they’re slowly perfecting.

LISTEN to “The Devil Arrives” on Bandcamp here.