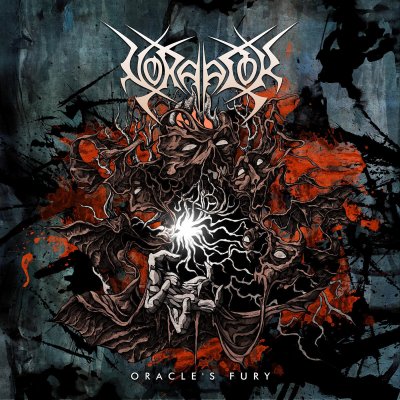 I’m a firm believer in when any band that’s been apart for well over a decade comes back together for a terrific album that it’s a time for celebration. Rarely is it a time where bad material is thrown around specifically because the musicians are, more often than not, much wiser in the ways of being competent musicians. It’s led to many great comeback albums that don’t get nearly enough credit that they deserve, and Vokodlok’s EP is absolutely one that deserves to be well-treated.

The very sound difference between what we hear on “Oracle’s Fury” and the previous material that this band created twenty years ago tells us so much about how far the duo behind Vokodlok has come since then. Simply put, significantly better! With just five tracks and one well done cover, “Oracle’s Fury” does not fuck around for even a second. In every track, we’re granted a raw black metal creation as Vokodlok does nothing but seek renewed desecration in their conquest with what’s undoubtedly their finest work yet being shown off beautifully the longer that “Oracle’s Fury” grinds on for. It’s voracious in virtually every way in such fashion that will make many a black metal fan’s lips salivate at the very notes as Vokodlok impresses from song to song. Such raw fury and unbridled energy is the exact sort of material that many of us are always clamoring for, and there’s no way to deny that Vokodlok has absolutely created something here that so many of us can sink our teeth right into without having to even think about it for a second. Everything about it is far more than appropriate for a return like this as “quality” is more than synonymous with the very title of “Oracle’s Fury”.

A very straightforward record with many going to take it at face value to not really see the potential that’s constantly going on, this is undoubtedly something that should become much more well known amongst the community. Simply the news that Vokodlok has returned is enough to catch someone’s attention, so to see them deliver on that promise without any sort of misstep is to be bestowed a gift whose excellence cannot be ignored or understated.