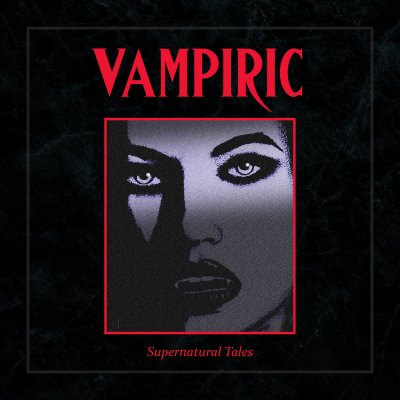 There are many instances of tons of different bands constantly pumping out material at an alarming rate to where, like many things, it’s impossible to keep up with them all. By far, my favorite of these lands on the name of Esoctrilihum whose name I’ve been advertising a hell of a lot lately, but I promise it’s appropriate. But, Esoctrilihum is likely the best-case scenario for a band constantly releasing material with each album being better than the last and the name of the band being cemented as need-to-know and essential for the current underground world of metal. Yet, there exists another band (and many others, I’m sure) who has so far remained in the shadows yet has shown to be getting better year after year. Vampiric has delivered in the past in great detail, and now the man behind it is back for the third year in a row.

This is one of those bands that really embodies the idea of a real underground act where you can feel that the man is making music because he enjoys it, and those who do the digging will find themselves in for a real treat that those who only look at the top albums charts will never stumble upon. With his demo in 2018 and then a bewildering full-length the following year, Vampiric has already shown us to be an incredibly capable musician by all accounts and one that evolves from one release to the next. But before now it had yet to be seen if he could keep that momentum from one full-length to the next. After listening to “Supernatural Tales” for a solid five hours now, I think I can confirm without a doubt that the momentum has not only stayed but increased dramatically in the less than a year gap between albums. It not only shows us that Vampiric is capable of bettering itself in a pretty short amount of time, but that, given even more time, it will be able to produce something truly monumental that I will not be able to stop talking about.

This time around, there’s a lot more happening within the music. With a more refined focus on the symphonic elements that play a bigger role in “Supernatural Tales” than before to bring an atmosphere that’s just as entrancing as it is entertaining, and that’s not even considering how masterful the rest of the album is! Without a doubt in my mind whatsoever, this is the best that Vampiric has ever created thus far. “Supernatural Tales” is a triumph in every way for Vampiric as it brings together everything that the act has performed before to amazing detail and taking it to another level altogether to create something that really impresses right from the beginning. We’re given a true menagerie of riffs, articulate detail, and a brilliant blend of black, heavy, thrash, and symphonic metal in every single track that instantly elevates Vampiric above many other underground acts who are trying to create something new without even putting in the effort. It’s a gorgeous result by all accounts, and I have a small hunch that Vampiric will be showing up again on a year-end list so long as “Supernatural Tales” sticks as strongly as I think it will.

This was a real surprise that I was not expecting whatsoever, and it’s everything that I could’ve asked for from a new Vampiric album in every single way. It brings up everything that’s been done so far up an entirely new level without any sort of hesitation or misstep, and it is the epitome of a work that Vampiric in should be absolutely proud of. From beginning to end, “Supernatural Tales” is nothing to scoff at whatsoever and I already can’t wait for the next edition in this increasingly promising streak of releases.

LISTEN to the single, “Bloodthirst”, on Bandcamp here.