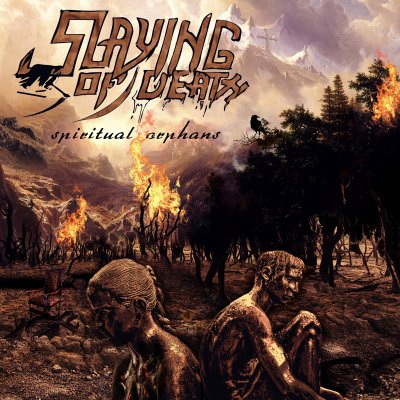 Most of the time that I encounter melodic death metal, it tends to be in the form of something really heavy but still incredibly accessible like what we’ve been getting from Amon Amarth lately but in varying degrees of heaviness from band to band. Some like to make a much more colorful sound, and some kind of feel like they’re doing their own thing a little bit. Fresh bands tend to take an album or two to really get a handle on what they’re going for when it comes to melo-death, but some seem to know exactly what they’re doing right out of the gate. Without a doubt, Slaying of Death is a perfect example of such.

I have to be honest and say that at first, this album wasn’t really compelling. It quickly felt like it fell into the same trap that many fresh melo-death bands do where they haven’t quite nailed down their sound yet so it’s a little all over the place, the post-production could be better (but that’s something I can easily look over), and it just felt clunky in many places. But, after a few more listens, I’d be remiss to say that “Spiritual Orphans” didn’t start to quickly grow on me. The debut boasts some tantalizing melodies and tasteful heaviness that pushes through the missteps that Slaying of Death makes along the way as they’re made to work. It shows that this act out of Macedonia already knows how to craft a cohesive album that can work past its imperfections to ultimately make something that the listener can really get into without the flaws shining too brightly as the cons are unequivocally outshined by the pros as they continuously stack up to culminate in a listen that’s as intriguing as it is satisfying. Plenty of “Spiritual Orphans” allows the creation to become a pretty well-rounded work that has a good grip on what it means to be a solid melo-death record with the understandable missteps of any young band being swept right underneath the table to really make the album stand strong in just about every aspect.

These eight tracks show us that Slaying of Death is onto something that can very well blossom into a performance that could stun and impress given the right circumstances and approach from the band. “Spiritual Orphans” has a ton to offer for many fans of the style and I’ve little doubt that this band will grow into something worth listening to by every single fan of the sound.