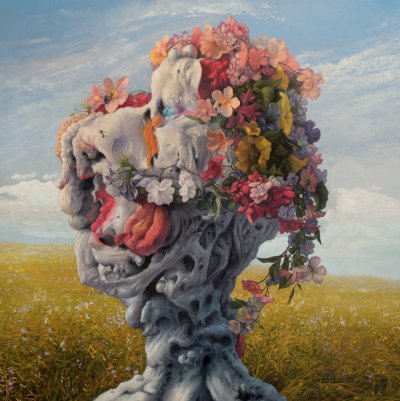 About once a year or so, we’re treated to something special from the likes of the underground that draws from a truly special place the likes of which makes any worthy band destined for greatness. Works like this aren’t common enough, and last year it was Sojourner that delivered it to us, Lör the year prior, and Downfall of Nur and Selvans teaming up for it the year before. It’s this very special corner of folk metal that can produce something truly fascinating, and this year it’s Wilderun that should take the crown as the style’s most compelling work.

I wouldn’t expect something so grand to come with cover art like that as I wouldn’t know what to normally expect from an album with that cover, but to say that the contents of this record are epic and grand on a scale untold of would be putting it absolutely mildly. There’s so fucking much to dig through with what Wilderun has put on display here that it’s a true task to put it into words. Each track has something marvelous to call its own and the very name of “Veil of Imagination” is a perfect description for the performance here for how sprawling and entrancing the record as a whole is with so much ingenuity and grandeur spilling out of every note that Wilderun brings forth here without hesitation, and such experimentation and mastery of their craft has enabled them to create something that many wouldn’t hesitate to call a masterpiece.

Right from the beginning, it’s clear that Wilderun did not create just another album to be added to the ever-expanding selection of folk metal but, rather, have followed in the footsteps of those previously mentioned as to bring forth an experience that is nigh on intoxicating, enthralling, and damned good right to the very end! There is truly something here for everyone be they desiring an epic the likes of which the intro and finale songs provide with amazing quality, a more ferocious approach that’s still gorgeous, or a blissfully tranquil work that bewilders us with its beauty and imagination; “Veil of Imagination” virtually has it all. Every possible aspect here is everything that something epic of this caliber deserves and demands with there being everything imaginable working in the favor of Wilderun here for this effort, and if this doesn’t go down as one of if not the definitive work of its kind that absolutely must be heard this year, then I don’t know what good shit is anymore! There isn’t one single thing that I would dare to change here with everything being fucking nailed right from the get-go to where “Veil of Imagination” has taken on a life of its own such that Wilderun should be extremely proud of what they’ve brought forth here.

Like I said, we’re granted works like this only once a year and I’ll be damned if I let such a work like this go unheralded, but, fortunately, it would seem the ever-vigilant listeners on Bandcamp have already cemented this record’s deserved fame and rightfully so. “Veil of Imagination” is a work that needs to be heard at least once by anyone who dares consider themselves even the slightest fan of folk metal as it’s Wilderun that will deliver something that won’t be easily forgotten.

LISTEN to “Veil of Imagination” on Bandcamp here.