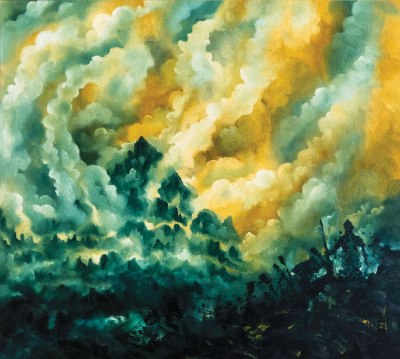 The comfort zone is something music has always stepped out of just as much as it’s stayed in an easily profitable state of copy and paste commercialization, but innovation is constantly pushing music in every possible direction with metal being no different. It’s always being twisted by many brave bands to take things from different genres and spaces to create wholly unique experiences. No other act embodies that more than Les Chants du Hasard who is a truly one of a kind band who brings fantastic orchestral arrangements to the table. But, instead of putting the orchestra in the metal, he puts the metal in the orchestra. Growing exponentially from his already grand debut, this work is truly something else to behold entirely.

It’s always a bold statement to claim any single body of work as “unique” or “one of a kind” but I mean it all the way without a single ounce of hesitation when I say it in reference to Les Chants du Hasard. I haven’t seen any other work like this before or since this act’s debut work two years ago. And this is far from anything I feel most people would find anything even considered metal, but like I said – it’s the metal that’s put into the orchestra yet again with “Livre Second” and I couldn’t have hoped for anything better. The man behind this truly went above and beyond to make this effort so many leagues ahead of its predecessor from its depth to its complexity to its darkness to its masterful composure. There were so many things that Les Chants du Hasard did spectacularly is blown way up with “Livre Second” such that you can feel every ounce of energy that this act is pushing forth as well as the life that it’s draining from the listening with its intoxicating symphonies of darkness that are just nigh on tantalizing.

Listening to this work knowing that it ties into metal somehow and not knowing what can be incredibly puzzling, but it’s the occasional appearance of the vocals that ties Les Chants du Hasard to the realm of black metal that’s pulled off with tons of imagination and perfected with loads of talent. They are quite sparse in the long run of “Livre Second”, but they play an incredibly important part that brings together these ominous themes of pure darkness and strong, torturous emotion with such excellence that it’s still hard to comprehend after drowning myself in these sonic waves for hours upon hours. What’s still fascinating to me is how gripping “Livre Second” is! As someone who’s not particularly into orchestral music but can really appreciate all that goes into it, Les Chants du Hasard has arranged a body of work that instantly knows how to grab the attention and never let go as we’re constantly shown through numerous peaks and valleys of equally gorgeous and horrifying visages that adorn every track perfectly such that “Livre Second” can easily be considered the greatest unique work I’ve heard in a long fucking time. With only one track of reprieve that is just breathtaking, Les Chants du Hasard has brought forth a grand company of compositions that are as varied as they are grand, intoxicating as they are menacing, unique as they are potent, and colorful as they are bleak. Truly, this is a work that needs to be hailed as one of the year’s greatest releases come the last days of it.

I knew I was in for something interesting at the very least when I sat down to listen to “Livre Second”, but, as you’ve noticed, I was just truly blown out of the water here. Every single possible piece that could have been improved from its already applause-worthy predecessor has been improved upon so masterfully in a way that I’m hard-pressed to find any description for this experience other than virtually flawless. Les Chants du Hasard continues to be one of the most unique acts that I’ve seen related to metal at all, and it’s with the very opposite of a whimper that “Livre Second” delivers an earthquake of performance at every single turn!

“Livre Second” releases on November 1st via I, Voidhanger Records!