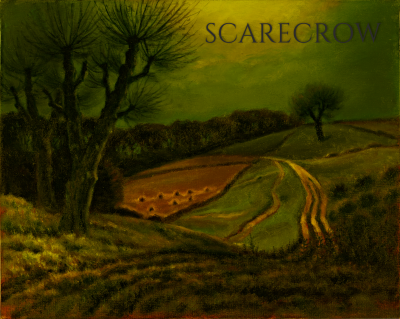 It’s always nice to see any given band try to accomplish a different sound in order to either just have a fun time or make a statement. I tend to have a good time just hearing something even mildly different, and it’s usually a treat to see a band try something new with each track in a given album from them since it’s normally one congruent sound for an entire album and not a fresh sound with every track. Some bands are bold enough to try, though, and Scarecrow definitely tried with admirable results with their first full-length album.

A cover like that isn’t exactly something that screams plenty of diversity when it comes to the actual content of the album, but if there’s anything that Scarecrow isn’t it’s stagnant. There isn’t a single track of this respectable album that can’t be traced to some corner of music that isn’t far from the previous or following songs that follow that very same rule. The result is a very odd jumble of different sounds that could very easily grab from metal or folk as it from jazz as well as bring in symphonic or psychedelic effects with an occult edge all because why the fuck not? Shockingly, Scarecrow makes it all very easy to digest where many acts would find it hard to balance it out but Scarecrow has found a solid balance amongst it all that makes it incredibly digestible and very enjoyable at that. Every track has a fantastic life of their own that always keep you guessing as to what’s coming next, interested in what Scarecrow is going to pull out of nowhere for the next track, or how they’re going to make it all work when they bust an entirely fresh sound out of fucking nowhere.

And I just can’t get over how well it all comes together! It makes for an amazingly engaging album that shows that Scarecrow has much more than I would’ve first thought from seeing that cover art, and I couldn’t be any happier to be surprised with this. This is surely just the beginning for Scarecrow, and I’ve no doubt that they will continue to keep us guessing with each and every new album they bust out.