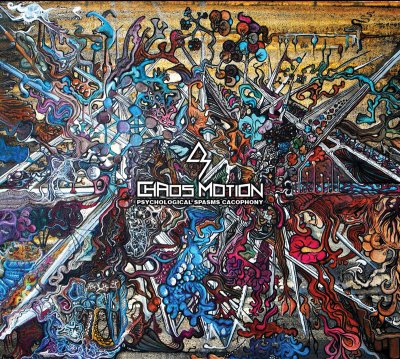 More often than not, when we get a new technical death album we’re treated to a display of one of two things: an aural explosion of chaotic beauty or a full-on force that’s made to shred anything in its path. Those two paths can easily lead to some tremendous tech-death that we can easily feast on without much issue as there’s something to quickly latch onto and enjoy. But there’s always an exception to every rule, and for that rule of tech-death comes Chaos Motion with a perverted take on the genre that is just as grotesque as it is bewildering.

Whether it’s through being super flashy or working in loads of riffs with a shit ton of brutality, there’s always been something for us to latch onto in order to find an enjoyable experience amongst all the madness. But, much like how noise is a dark version of the world of ambient, Chaos Motion has created something truly menacing and nasty with the upcoming cerebral experience that is “Psychological Spasms Cacophony”. There is not a fucking nice thing about this record as of right from the beginning it is out to get you even from the cover art trying to melt your eyeballs it’s the entire rest of what Chaos Motion has created here that’s enough to turn your brain into mush with little to no effort. Each and every track off of “Psychological Spasms Cacophony” has its own insane personality that twitches in a new direction at any given moment as Chaos Motion rarely create a sound that can be described as good in any form whatsoever, but it’s through being so crazy and unpredictable that this album becomes a real spectacle like none other in the entire genre. Where many bands would use insane finger-play across the strings or put together dazzling rhythms to create a colorful technical death metal experience, it’s Chaos Motion that has sought to create a different kind. One that does not leave room for any sort of prisoners much less for anyone who might seek to enjoy such a raw and primitive sound that pulsates so irregularly but with such constant pressure that it’s near impossible to turn away from. And it’s in such a nasty fashion in one devastating display after another that “Psychological Spasms Cacophony” succeeds in its villainous mission.

It’s always fun to see a band try something different with any given sound, but this is something else entirely on a level that we just don’t get. This is not meant to be something that’s commercially enjoyed, and yet there’s something oddly alluring about this disgusting album that has earned Chaos Motion a set of stripes that’s rarely achieved in the music world and incredibly hard to nab at that. In every form, “Psychological Spasms Cacophony” is far from anything that should not be heard by the unprepared, and it’s a cerebral experience that’s damn hard to digest even if you are ready.