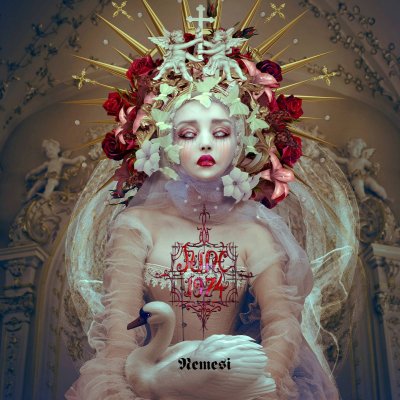 Much of the time that I go to sit down and listen to something instrumental, it’s always to take my mind off the day that I’ve had and simply allow the soundscapes to wash over me completely with the music taking me somewhere else entirely. The vast majority of the time, it’s a thoughtless process that simply happens. But when I sat down to listen to the latest album from June 1974, I didn’t know I was getting something instrumental if I’m completely honest, but even if I approached it as if I knew that, there’s nothing conventional about this record that I could’ve been warned of properly.

Now, that sounds as though I’m about to throw “Nemesi” right into the fucking trash after using wording like that, but in no way am I doing that. In its simplest form, June 1974 is a shining example of what it means to make music that is almost completely without genre as we get so much in these ten tracks that even me pinning as some amalgamation of rock and metal is pushing it a little. There’s not a single song throughout the wide array of sound that is “Nemesi” where one repeats the other nor where the exploration ceases by even the slightest degree as June 1974 shows us just what it means to dance across the very board of music altogether. With the first track having more electronic effects than rock, it was honestly a little off-putting for me, but should you open up your mind enough and allow “Nemesi” to take hold then you’ll be shown an extremely colorful wall of sound that’s enamoring in its own unique way that’s not afraid to make a new right turn come to the next track. Very few bands are able to be as seemingly random or even compulsive and then proceed to make it all come together nice enough for the album to not sound like a fucking mess, but June 1974 has done the impossible with this record in all of its craziness and wandering natures.

I’ve never thought before that I’d be real into an instrumental record that makes me think rather than helps me turn my brain off. There’s so much happening within “Nemesi” that I can’t help but try and pick about every one of its mechanics, and there’s always so much more with each listen as June 1974 has created something that may not be appealing at first but soon becomes something that must be dissected and understood wholly.