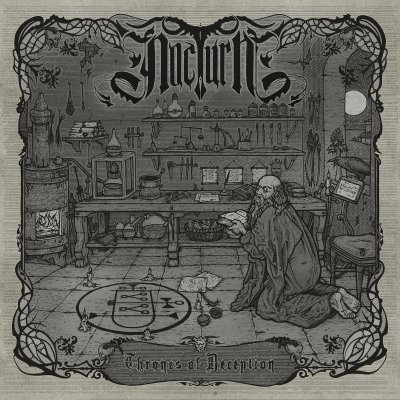 The riff is something that we’ve all seen within the world of black metal for literally decades now, and, thankfully, it shows no signs of going away as there’s something special about the vicious style combined with a good riff that always makes for something to come crawling back to. And it’s easy enough to throw some half-assed riff into the mix and say you got riffs for days, but it’s only with bands like NocturN can you really boast such a thing and it’s only with albums like “Thrones of Deception” that we see them on full display in all their glory at all times.

What I find the most enjoyable outside of a good riff other than just it existing is how it has the extraordinary power of being able to really carry a song along with minimal effort while showing off plenty of what the rest of the band is capable of as the synergy comes together incredibly well. Thrash is a great example of how that can be done to full effect, but it’s black metal that does somewhat of the same thing yet it feels more amplified somehow with the harsh vocals to where everything is all the more infectious, and that’s precisely the case with NocturN. There isn’t a song throughout all of “Thrones of Deception” that doesn’t have a delectable riff to call its own, and it’s from that one thing that NocturN is able to expand forth from and show us just how intoxicating they can be as a band that hasn’t put any material out in eight long years. Such a thing can really or break a band, but I couldn’t have asked for anything better with “Thrones of Deception” being an absolute thriller of black metal as it doesn’t lean too much on the core ideals of the style, and instead opts to make their own sound without completely ditching those very same ideals that eventually help make NocturN the treat that it is.

An album can sometimes fall apart if the band in question feels too focused on making the riff the main, and ultimately only, perk to go around for that album as the rest of the instruments feel neglected. Luckily, that couldn’t be further from the case with “Thrones of Deception” as everything gets its own time to shine as NocturN has created something that may not be new or groundbreaking for the world of black metal as a whole, but I’ll be damned before I call this record boring to any degree.

LISTEN to “Thrones of Deception” on Bandcamp here.