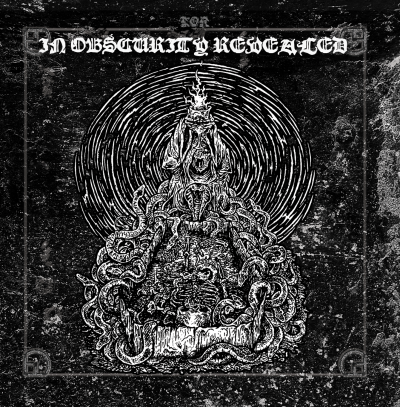 Recreating the classic, old-school sound that death metal has become somewhat of a fixation among its inhabitants. I like to think its a form of flattery as many people are trying to recreate a sound that they love so much, but like all music, it is delivered with varying degrees of success. A band can easily get lost in trying to sound like an old school act that they forgo the overall quality. But it’s groups like In Obscurity Revealed that show us how it’s done, and their latest EP is quite the display of power.

A common theme I’ve seen that can clearly be seen all the way back to classics works like Cannibal Corpse’s “Eaten Back to Life” is that the early roots of death metal is heavily if not wholly inspired by thrash, which makes sense given the time period. Many bands tend to go for the mid-90s sound more given how that’s where death metal truly starting to differentiate itself from the rest of the world of metal to become its own thing, and that’s where many newer acts aim to replicate. Not many go for the truly original days where everything was fucking fast and brutal laced with that undeniable flavor of the underground itself. In Obscurity Revealed found that tasty middle ground where very few new bands find themselves in a blistering whirlwind of blood and marrow that has an undeniable quality to it. In its entirety, “Spell of the Seeker” has but four tracks to call its own but it with those four pieces that In Obscurity Revealed shows their flavor and tenacity. The scant 11-minute EP may not have much material to call its own, but this act makes an impression with gory riffs, an occult rhythm that permeates every moment, and a ferocity that’s no less than bloodthirsty from start to finish. It all comes together to make “Spell of the Seeker” a very engaging record that wastes no time whatsoever, and that’s perfect as In Obscurity Revealed clearly isn’t here to fuck around and they’ve crafted an EP that’s virutally immaculate to get that message across.

I can really see this band honing their craft to a deadly razor’s edge very quickly so that by the time we’re treated to new material from In Obscurity Revealed it will be no less than monstrous in form and delicious in taste. “Spell of the Seeker” is a terrific prelude for us to see what this group is capable of, and I’ve no doubt that it will result in no less than pure excellence that only can be found in the dark cavern that is the metal underground.

From what I could find, In Obscurity Revealed does not have any sort of social media page so please like their label, Cyclopean Eye Prodcutions, on Facebook here in order to stay up to date and everything related to the band and more!