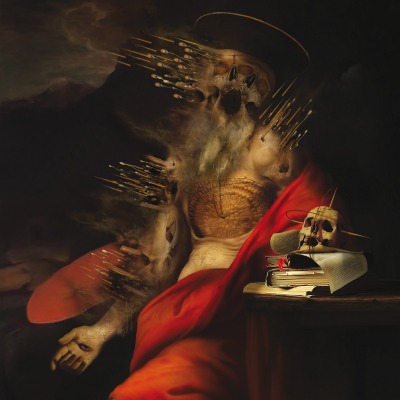 Even though metal is easily the most diverse genre in all of the music worlds with having niche corners creating by unique bands every single year, I find myself wanting to hear different things. But, with these reviews, I try to keep it either related to metal, rock or ambient so I don’t go to places that aren’t suited for this site. But sometimes I like to tread the line of metal and elsewhere along with the bands in question who truly bring something new to the table. Inhumankind is the first band in a long time that has presented to me a style that I couldn’t find anywhere else, and their upcoming record is quite the thought-provoker.

To be completely honest with you, I likely would not have investigated this album if it weren’t for both (1) that tasty, tasty cover art and (2) the band’s label who I rave over. Given that, I dove right into “Self-Extinction”, and what I was greeted by was not what I expected from aforementioned two points. To sum it up simply, Inhumankind technically consists of flutes, vocals, and double bass spread across two people with everything else featured on “Self-Extinction” being guest appearances. That’s quite different when compared to the rest of my musical taste. But when I really allowed myself to fall in between the erratic freestyle flutes, the clearly jazz-inspired double bass, and the choir that serve as the vocals, it had an oddly refreshing sound to it all that was simply delicious to hear if you allow it to really process through your mind. Combine all that with angelic vocals sung by a pair of very talented women along with some terrifying growls that are clearly inspired by metal, “Self-Extinction” is an amalgamation all on its own! Inhumankind shows that they’re not leaning on the shoulders of any past legends to propel themselves forward, but instead these Spaniards show that they’re charging forward with a sound that they can truly call their own! We don’t see that often at all, and after a few listens to “Self-Extinction” I found myself whistling to the flutes, tapping to the bass, and getting into the growls. Inhumankind knows how to take a completely unique style and hone it to a dangerous edge that they wield with utmost precision to create the near-half-hour experience that is this album.

Extremely few acts as ambitious or innovative come around like this, and Inhumankind shows clear promise the likes of which metal along cannot encapsulate. It’s a daunting shift for someone like myself, but I’m glad to see that Inhumankind impresses with the end as this truly one of a kind concoction doesn’t disappoint. “Self-Extinction” is hopefully the first of many excerpts from this stellar act, and I’d be keen to eat up as much as I fucking can!

“Self-Extinction” releases on March 30th via I, Voidhanger Records!

LISTEN to advanced tracks from “Self-Extinction” on Bandcamp here.