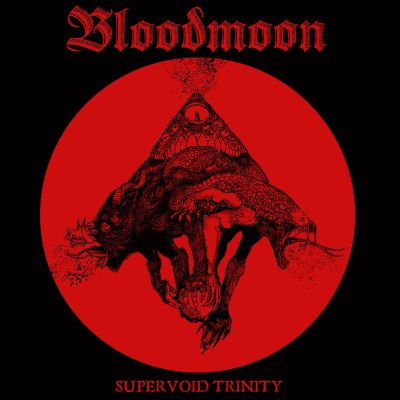 Ever since I heard my favorite album of all time, Inter Arma’s “The Cavern”, I have been on a very loose search to find albums similar to that: a 45-minute long song that’s as well crafted as it is epic. Very few bands are willing to accomplish such feats, but doom metal has provided a handful of good acts for my search to bear actual fruit. It doesn’t happen often, but with Bloodmoon I’ve given another amazing long-winded piece in the form of Bloodmoon’s brand new masterpiece that’s should be used as a blueprint for many bands to follow.

Since the release of “The Cavern” back in 2014, there have been a few notable one-track albums that have caught my eye and love from lesser-known acts like Canyon of the Skull or Todesstoss to more renowned groups like Bell Witch and Kauan. It’s far from a common thing as it’s a monumental task to undertake that takes much more skill, musicianship, and talent than what most have, but it’s bands like Bloodmoon that make me want more! With their latest offering, “Supervoid Trinity”, this band not only gets the formula down perfectly with no problem, but they also manage to keep things incredibly accessible while still not being a complete snooze-fest. It’s quite the opposite as Bloodmoon delivers a riveting rollercoaster that’s equal parts intoxicating and rewarding.

The only lament I have about “Supervoid Trinity” is how it’s 46-minute length is broken up into three different parts (there’s a full version on Bandcamp but not on Spotify, odd but whatever) as I prefer to listen to albums like this in their entirety so I can eat up every piece as it comes along and not have it cut out at a random part. That’s just me, but in no way does that dampen my thoughts of “Supervoid Trinity” as it’s easily one of my favorite albums of the genre that I’ve heard in a good long while, and Bloodmoon only gives me more reason to love them with every passing minute. These 46 minutes treat us to a lesson in doom metal that doesn’t only extend beyond the genre’s boundaries, but it also shows how to properly pace yourself over a ridiculous stretch of time without making the listener fall asleep. “Supervoid Trinity” starts off slow, sure, but it soon builds up to a real slaughter before going back and forth with its levels of aggression to its tripper lulls that draw you even further into the depths of what Bloodmoon carves out for us. It’s all done with brilliant musicianship that’s all but immaculate to really show off what mastery Bloodmoon has over their craft, and with every listen comes a new piece of excellence that I missed before. As a staggering achievement that any band can be proud of creating, “Supervoid Trinity” shows that Bloodmoon can take over the scene if given the right chance, and this album will be the sword with which they will blaze their own trail with!

This is the exact sort of thing that I’m always on the lookout for, and I’m so glad that Bloodmoon did a magnificent job with this display of power as it’s everything I could’ve hoped for out of a piece like this! In every single way, “Supervoid Trinity” is an absolute domination over doom metal and everything that Bloodmoon put into this record as it has created something truly special that will mark this bands as something that needs to be heard at least once for anyone who likes their doom not only three-dimensional but incredibly enjoyable.