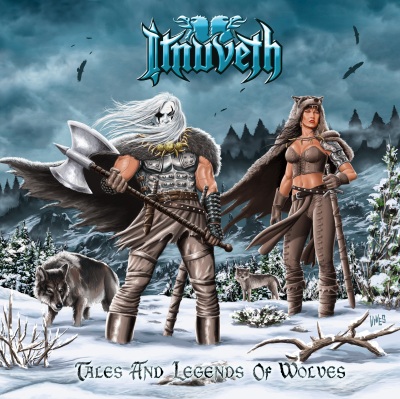 Easily, my favorite thing about the massive underground of metal is the amount of talent that there is spread throughout it, and finding a good band that not that many others know of feels like a real treasure find. That’s how I felt when I first heard Itnuveth back with their debut in 2014 and every year since there’s been new material for us to sink our teeth into as they press on with their special onslaught of pagan metal. This year heralds their fourth album, and it has as much excellence as I’d expect from this Spanish group.

I’ve always associated Itnuveth with two things: (1) stupendous cover arts always emphasized with a badass mascot and (2) black metal that calls upon the spirits of a forgotten, violent realm that is in constant turmoil. The band has been a mere yet very effective duo up to this point, but with their brand new effort of “Tales and Legends of Wolves” Itnuveth has recruited the help of a tin flute to bring even more of an ethereal feel to the already impeccable music. Then there are the ten tracks that this record brings to the table, and while it’s not my personal favorite that I’ve heard from Itnuveth, it’s an extremely close second. While still retaining the epic sense of adventure, readiness of battle, and tranquil interludes for terrific perspective at the band’s capability, “Tales and Legends of Wolves” is easily the most rhythmic that Itnuveth has been over the years, and they pull it off quite well. These Spanish gentlemen are far from strangers of being sparingly melodic, but this album brings it to the foreground much more to where the entire song revolves around the rhythms much more than usual, and that helps bring everything together in a much more tantalizing experience. But at the end of it all, Itnuveth just has a unique charm that I’ve only heard from them that comes from combining a terrific tone centered around a medieval feel executed by a raw black metal approach that melds perfectly together, and it shows for the fourth consecutive time with “Tales and Legends of Wolves”.

One of the challenges about doing these reviews and trying to be objective rather than subjective is putting aside any previous emotions I might have for the band in question. Luckily for me, whenever I come crawling back to Itnuveth every single year there’s never a disappointment to be made anywhere in their material, and this time is no different! “Tales and Legends of Wolves” is another magnificent album that really shows off the ingenuity of Itnuveth for the fourth fucking time while still allowing the members to try new things while still remaining true to themselves. That’s something not many bands can say, and Itnuveth should be very proud of that.