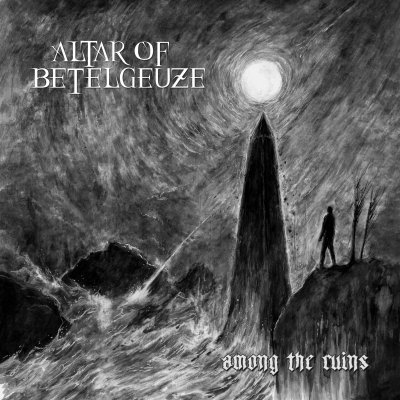 I think it’s a very obvious thing to say that it’s the bands that manage to branch off from the rest that truly makes an impact. Sure, a new yet unoriginal death metal band can make a name for themselves in today’s world, but what about the bands that want to think at least a little outside the box? It’s bands like Altar of Betelgeuze that exist almost solely to remind us what it’s like to be imaginative with metal. A brilliant breath of fresh air, these Finnish gentlemen aren’t fucking around one bit.

Let’s start off with the basics, shall we? Altar of Betelgeuze aren’t doing anything super duper fancy with metal or got any sort of gimmick with their sound. In the simplest terms, they’ve taken the sound of stoner doom and smashed it together with some death metal. We’ll call it stoner death just to keep things short, and it’s not the most monumental thing I’ve heard in recent times, but damn did it make my head turn! As the upcoming record from this Finnish group, “Among the Ruins” stands poised as being the record that’ll give them the notoriety they’ve been building up to, or the band will remain an underground sleeper hit. Hopefully, the former will come to pass as every moment of “Among the Ruins” is simply delicious. When I went into this record, I was expecting all of the vocals to be deep growls that simply destroy. Seems fair, right? Well, not only does Altar of Betelgeuze deliver with growls but they also provide clean vocals that provide a fantastic contrast, and they’re pulled off so much better than I would’ve ever expected. Then we get an absolute smack down with the crunch of the stoner doom coming in along with a tempo that varies between slow and mid-paced, but that constantly shifting really helps “Among the Ruins” flow and breathe throughout its fairly lengthy tracks. It’s the simple fact of how Altar of Betelgeuze can create something that initially sounds a tad dull in the beginning but then prove all expectations wrong by bringing the power and awesomeness in absolute spades in all seven tracks.

Ever since hearing bands like Whispered come along, I’ve been looking for the next band that takes a style and turns it right on its fucking head. Altar of Betelgeuze didn’t do that with just one, but two (maybe even three depending on how you want to look at it) and it thankfully led to something truly badass! “Among the Ruins” is a fantastically crushing record that shows what happens when you have the drive to not dwell in the shadows of legends, but instead strive to create a name for yourself with your own sound. In that way, we need much more bands like this one now more than ever.

“Among the Ruins” releases on April 15th via Transcending Obscurity Records!

LISTEN to 3 tracks from “Among the Ruins” on Bandcamp here.