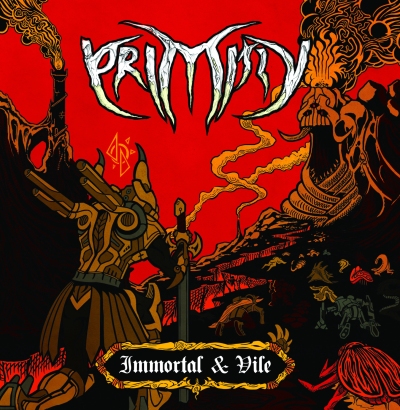 Oh, what’s a word that I can make up to describe this album? Riff-a-licious? Yeah, that should cover it. If you have ever fucking thought the thought “I wonder if there’s anything happening in the Indian death metal scene” then please look no further than Primitiv’s debut album “Immortal and Vile” as it is the most appropriate response to that thought that could possibly ever exist in the history of the earth. What does death metal need? Brutality, super deep vocals that sound as awesome as they are guttural, an overall feel that beckons the apocalypse itself, and for good measure a fuck ton of riffs that keep a firm grip on your attention and never lets go for the entirety of the album. Even the intro track (which sounds like it’s beckoning the apocalypse itself!) gives you this feel as though so something monstrous is coming and you’ve no choice to stick around and find out what the fuck it’s going to be, and then out of fucking nowhere comes the track “World War Zero” with is indomitable opening riff and then proceeding with sheer intensity that is bone crushing to say in the least. Then what follows after that magnificent track are five songs that are masterfully crafted to include a fierce attitude and an atmosphere that is like the wrath of the gods raining upon and thus destroying all of mankind. Ergo, all of “Immortal and Vile” has a powerful presence that cannot be denied or ignored even when Primitiv has the balls to bring the intensity to a halt. When that happens you are just thrown into a world where all is falling apart and you are sent into a limbo to await the coming destruction that is but the second wave of death metal that is but the beginning of many more to come. Do I like “Immortal and Vile”? It would be an insult to say you didn’t because if you are even the slightest bit of a fan of death metal you cannot and absolutely should not pass up Primitiv. They will give you an experience with this album that you will not want to miss as it is one of those few experiences that when you’re truly listening to the music, you feel immersed in something so much more than just music, and the only way you can comprehend that feeling is if you’ve felt it before. And if you haven’t felt that before then I implore you to check out “Immortal and Vile” when it releases next year. It will be one of the best ways to start out a new year for not just death metal or the Indian metal scene, but metal as a world entity that shows it is not quitting anytime soon and has so much more to do. Primitiv are just getting started, and “Immortal and Vile” shows that the path of destruction that they’ve created before themselves has only just begun it’s glorious reign.

BUY the CD for “Immortal and Vile” via the Transcending Obscurity store here!