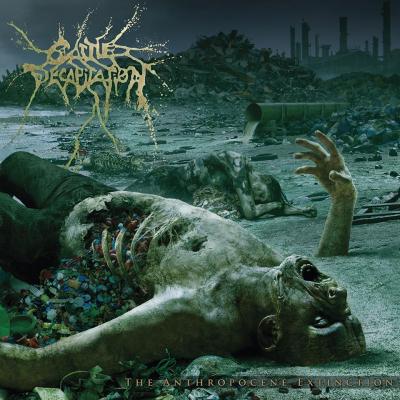 I remember hearing the intro track, “Manufactured Extinct”, off of this album months ago and thinking “I cannot fucking wait for this album!” Thankfully, those words weren’t said with false hope as Cattle Decapitation’s newest album “The Anthropocene Extinction” is more than I could’ve fucking wanted. Ergo, this album is fucking amazing in every sense of the term for any sort of death metal mixed with grind and progressive metal. This album absolutely shreds in just about every single track and it just made my brain melt out of my deafened ears after I played “The Anthropocene Extinction” at least . . . three? Four? I don’t even remember how many times. I just can’t get enough of this album. The vocals vary from your almost every day death metal vocals, to a more shrill screech to the guttural bellowing that’s very much like brutal death metal if you as me. The guitars and drums are ridiculously fast, brutal, heavy, and everything a death/grind fan could ever desire, imagine, and/or need. The only real exception to those sentences is a few parts where the album slows down, takes a moment, and really sets a desolate tone that is perfect for this sort of album. And side note, vocalists like Philip Anselmo (Pantera), Author & Punisher (band is same name (one man band)), and Jürgen Bartsch (Bethlehem) appear on “The Anthropocene Extinction” which spices up this 12-track beast of an album even more. The fact that this album has meaning as well makes this infinitely better. There’s no better topic for Cattle Decapitation to rage on about than how humans are destroying the planet and what it will be like in all of its gruesome and gory reality. “The Anthropocene Extinction” is a fucking masterpiece in every single way with it being the absolute pinnacle of death metal that has once again come from the most renowned and brutal death metal bands in the history of the world. Shit’s awesome.

LISTEN to “The Anthropocene Extinction” on Spotify here.

LISTEN to the intro track “Manufactured Extinct” via YouTube below.