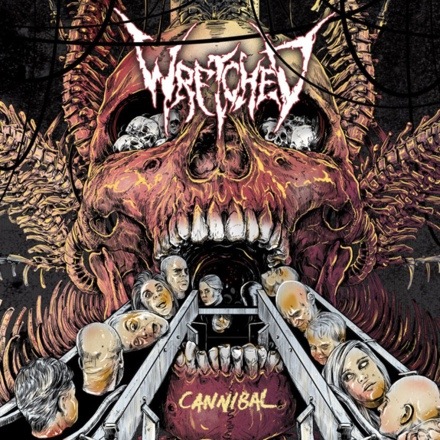 As Decibel Magazine put it “Wretched breathe much-needed life into thrash-influenced death metal.” Couldn’t have said it better myself. Many of us had heard Wretched’s second album “Sons of Perdition” and thought it was the shit. Well I’ve got some news for those motherfuckers. . . “Cannibal” is even better!! This entire album is by far the band’s best work yet and is start to finish a killer of an album that takes thrash and death metal and mashes them together to form something super heavy, ultra-fast paced, and fantastic. It’s hard to find an album like this that is so well done and coordinated that when you do find one like this you can’t help but relish the sound and quality and heaviness because it’ll likely be a while before you hear anything like it again.

The entire album is heavy and fast-paced as I said, and it has a sound and tone to it that will easily, if not instantly, make many metal heads around the world head-bang to this amazingly crafted album. The vocals in “Cannibal” ranged from very deep to loud and raspy in that they are sometimes high pitched but other times not so much. That is very nice because if you can get balanced vocals and keep them sounding great all the while, a band can gain several fans in an instant. The guitars and drums constantly have a fast beat to them that is very well executed and performed because together they both meld together and sound amazingly great, but by themselves they still hold weight to their respective notes because they make them profound and really put them in your face to ensure that you hear them no matter what. The tone and theme of “Cannibal” is so good that it still amazes me at how good Wretched pulled this off for just their fourth studio album. I cannot wait for them to push out another album because we all hope, and some know, that number five will be even better than this, and that will make them permanent legends in the metal community.